We run Babel Babies baby, toddler and pre-school language sessions in five-week mini ‘terms’ for lots of reasons. When we first started out we used to change the songs every week. Imagine that! Now we repeat exactly the same songs for five weeks.

Experience tells us that five weeks is just the right amount of time for songs in foreign languages to filter into our long-term memory.

I think that the usual learning curve for a first-time Babel Babies goer is:

Spaced repetition is a wonderful learning technique. We then take the songs you’ve just learned and put some of them in the next term as well, only changing three or four each term to ensure continuity and progression of learning.

I recently discovered the work of Hermann Ebbinghaus, a German psychologist, who did lots of research into our memory and how we learn. His ‘Forgetting curve’ is exactly the diagram I had imagined for Babel Babies sessions! 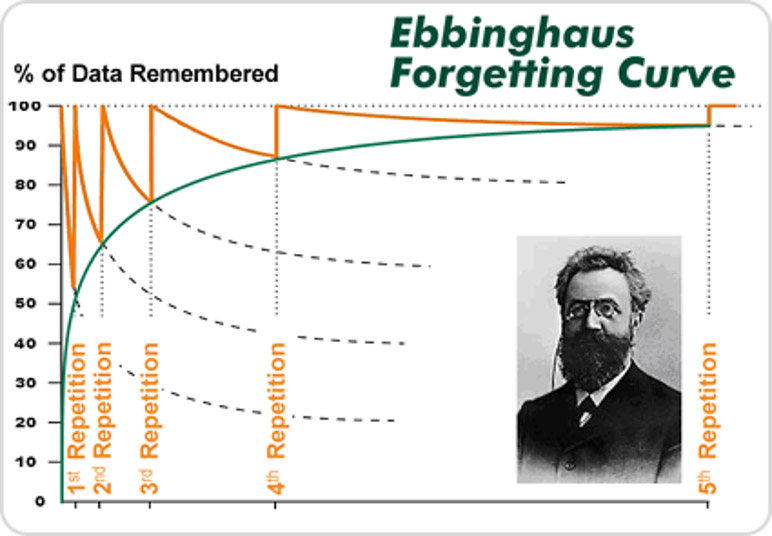 Basically, when you learn something you will forget 50% of it within an hour of learning it (!) but, if you review the knowledge at regular intervals for a month, you will retain that information and, coming back to it much later, you’ll still remember it.

So hurrah! Repetition every week for five weeks is the way to learn songs in foreign languages, or anything else you’d like to learn, and of course, the more times you review the information, the more it will become embedded in your long-term memory. And, after a few months, the babies won’t even remember a time when they weren’t able to sing ‘Wheels on the Bus’ auf Deutsch, or ‘Row the Boat’ in several foreign languages!

And a final word from Herr Ebbinghaus about learning Greek:

No matter how thoroughly a person may have learned the Greek alphabet, he will never be in a condition to repeat it backwards without further training.